EXCLUSIVE - President Obama can thank New York's culture of corruption and cover-up for the insight ....

Attorney General Eric Holder appointed two U.S. attorneys to investigate alleged White House leaks involving national security information.  If true, these are, of course, serious charges, and those involved should be severely punished. The troubling issue, however, may be easily explained- and rectified- without the need for criminal charges, expensive probes or a descriptive word ending in "gate."  Mr. Holder should have considered hiring a teenager.

If documentation revealed in April of 2012, and verified by Ethicsgate.com, is any guide, the recent 'leaks' are the unintended result of White House staffers' simply doing their jobs.  The activity of those workers' inquiring minds now point to the urgent need for a White House computer and internet security review and overhaul.

It would be normal for White House staffers to question whether any reporters were sniffing around the edges of U.S. involvement in a computer virus attack on Iran's nuclear program.  And It would be irresponsible for our President's men, and women, to ignore internet chatter speculating about details of covert operations, or specific names on any U.S. counterterrorism assassination hit list.  Such inquiries by members of the Obama Administration would find little need to summon the FBI or the CIA, and thoughts to devise a series of 'gemstone' master plans would be an obvious overreaction.  They were simply checking out what was happening on the internet.

A quick internet search serves the President's closest advisers just like it does for the rest of civilization. A White House staffer's search would produce a panoply of useful, and useless, data to consider.  More important than this raw information including and any verbal utterings by loose-lipped insiders, however, would be knowing what is going on inside the heads of those White House aides. The leak  headache for the White House may not have come the dissemination of information but from the act of gathering that relevant data.  Members of news organizations focused on White House activity would be less interested in having insiders' internet search results than of having the simple, but very telling, search words-  the actual words from the internet inquiry.

Reporters Knew What The White House was Thinking

It is likely that one or more White House staffers conducted internet searches that led to the specific computer "hits" that revealed to outsiders what people inside the White House had on their minds.  There were no late-night meetings in Washington, D.C. parking garages, no over-stuffed envelopes and no wire-taps. Perhaps a simple explanation addresses the sad fact that our President had to voice "the notion that my White House would purposely release classified national security information is offensive- it's wrong."  The 'leaked' information was most likely not knowingly provided- it simply appeared on the computer screen of the delighted recipient in the form of the actual search words as typed in an internet search engine.

A Google search, for example, would reveal those important search words- exactly as typed- to the IT folks behind the websites the White House staffers browsed. Consider the joy of some techie at The New York Times, Newsweek or The Washington Post who saw that someone from inside the White House sat down at their computer and typed, "computer virus Iran nuclear program."  It matters little if that internet search was done by the President, the White House chef or the resident dog-walker. What's important is that the internet inquiry was done from the White House.  This scenario would produce 'gold' to any reporter as it provides the perfect White House "source" and, conveniently, the provider is 'un-named.'

Getting Inside The White House, Then Ignored

As commonly known, all computer searches wind up on a variety of internet history logs that are analyzed for a variety of reasons including marketing. The host of any given website can review, unless it is specifically blocked, information about each visitor including their IP address, location, company/organization, and the actual search words used for any given search.  Incredibly, some computers inside 1600 Pennsylvania Avenue seem to be not blocking that vital information.

Consider the happiness of those New Yorkers fighting public corruption, including widespread state-court fraud for years, when at 2:52pm Monday, April 2, 2012 they saw that someone from inside "The Executive Office of the President of the United States" had traveled through cyberspace to their corruption-exposing website after conducting a Google search with the phrase, "Jonathan Lippman boondoggle."  The revealed data further showed that this White House insider was reading other referenced material including a New York Wall Street Journal Article, "When our Trusted Officials Lie" and a story about New York's top administrative Judge, Jonathan Lippman, "The Allegations of Jonathan Lippman's $40 Million Dollar Fraud." It terms of visits, or 'hits,' to their website, the New York anti-court-corruption group couldn't be happier as someone close to The President of The United States was apparently interested- very interested- in what they call Tamanny Hall II. 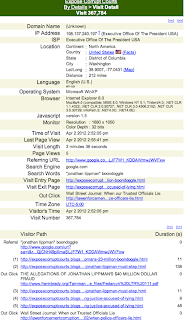 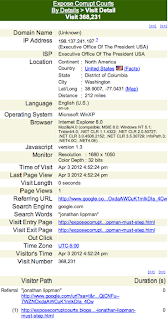 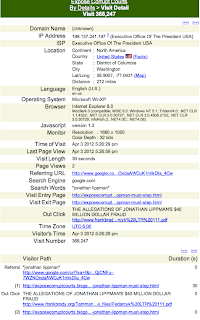 The above White House computer user returns later in the day to review evidence provided to the New York FBI...... 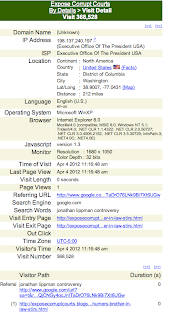 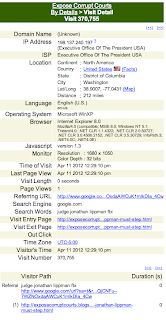 Twitter: @ethicsgate
Enter you email address in the box below to get automatic updates